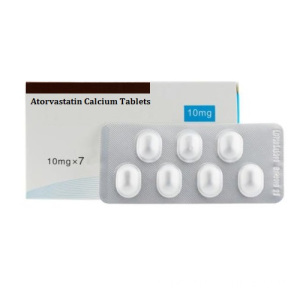 Paediatric use should only be carried out by physicians experienced in the treatment of paediatric hyperlipidaemia and patients should be re-evaluated on a regular basis to assess progress.

For patients aged 10 years and above, the recommended starting dose of atorvastatin is 10 mg per day with titration up to 20 mg per day. Titration should be conducted according to the individual response and tolerability in paediatric patients. Safety information for paediatric patients treated with doses above 20 mg, corresponding to about 0.5 mg/kg, is limited.

There is limited experience in children between 6–10 years of age (see section 5.1). Atorvastatin is not indicated in the treatment of patients below the age of 10 years.

Other pharmaceutical forms/strengths may be more appropriate for this population.

Atorvastatin is for oral administration. Each daily dose of atorvastatin is given all at once and may be given at any time of day with or without food.

Atorvastatin is metabolized by cytochrome P450 3A4 (CYP3A4) and is a substrate to transport proteins e.g. the hepatic uptake transporter OATP1B1. Concomitant administration of medicinal products that are inhibitors of CYP3A4 or transport proteins may lead to increased plasma concentrations of atorvastatin and an increased risk of myopathy. The risk might also be increased at concomitant administration of atorvastatin with other medicinal products that have a potential to induce myopathy, such as fibric acid derivates and ezetimibe (see section 4.4).

Potent CYP3A4 inhibitors have been shown to lead to markedly increased concentrations of atorvastatin (see Table 1 and specific information below). Co- administration of potent CYP3A4 inhibitors (e.g. ciclosporin, telithromycin, clarithromycin, delavirdine, stiripentol, ketoconazole, voriconazole, itraconazole, posaconazole and HIV protease inhibitors including ritonavir, lopinavir, atazanavir, indinavir, darunavir, etc.) should be avoided if possible. In cases where co- administration of these medicinal products with atorvastatin cannot be avoided lower starting and maximum doses of atorvastatin should be considered and appropriate clinical monitoring of the patient is recommended (see Table 1).

Moderate CYP3A4 inhibitors (e.g. erythromycin, diltiazem, verapamil and fluconazole) may increase plasma concentrations of atorvastatin (see Table 1). An increased risk of myopathy has been observed with the use of erythromycin in combination with statins. Interaction studies evaluating the effects of amiodarone or verapamil on atorvastatin have not been conducted. Both amiodarone and verapamil are known to inhibit CYP3A4 activity and co-administration with atorvastatin may result in increased exposure to atorvastatin. Therefore, a lower maximum dose of atorvastatin should be considered and appropriate clinical monitoring of the patient is recommended when concomitantly used with moderate CYP3A4 inhibitors. Appropriate clinical monitoring is recommended after initiation or following dose adjustments of the inhibitor.

Inhibitors of transport proteins (e.g. ciclosporin) can increase the systemic exposure of atorvastatin (see Table 1). The effect of inhibition of hepatic uptake transporters on atorvastatin concentrations in hepatocytes is unknown. If concomitant administration cannot be avoided, a dose reduction and clinical monitoring for efficacy is recommended (see Table 1).

The use of fibrates alone is occasionally associated with muscle related events, including rhabdomyolysis. The risk of these events may be increased with the concomitant use of fibric acid derivatives and atorvastatin. If concomitant administration cannot be avoided, the lowest dose of atorvastatin to achieve the therapeutic objective should be used and the patients should be appropriately monitored (see section 4.4).

The use of ezetimibe alone is associated with muscle related events, including rhabdomyolysis. The risk of these events may therefore be increased with concomitant use of ezetimibe and atorvastatin. Appropriate clinical monitoring of these patients is recommended.

Co-administration of atorvastatin with an oral contraceptive produced increases in plasma concentrations of norethindrone and ethinyl oestradiol.

Table 1: Effect of co-administered medicinal products on the pharmacokinetics of atorvastatin

* Contains one or more components that inhibit CYP3A4 and can increase plasma concentrations of medicinal products metabolized by CYP3A4. Intake of one 240 ml glass of grapefruit juice also resulted in a decreased AUC of 20.4% for the active orthohydroxy metabolite. Large quantities of grapefruit juice (over 1.2 l daily for 5 days) increased AUC of atorvastatin 2.5 fold and AUC of active (atorvastatin and metabolites).

Table 2: Effect of atorvastatin on the pharmacokinetics of co-administered medicinal products